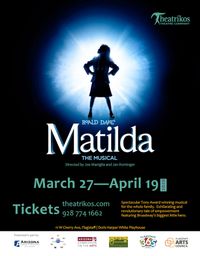 Revel in the anarchy of childhood with Matilda the Musical at Theatrikos Fun for the whole family Inspired by the twisted genius of Roald Dahl, the Tony Award-winning Matilda The Musical is the captivating masterpiece from the Royal Shakespeare Company that revels in the anarchy of childhood, the power of imagination and the inspiring story of a girl who dreams of a better life. With book by Dennis Kelly and original songs by Tim Minchin, Matilda won 47 international awards and continues to thrill sold-out audiences of all ages around the world. Matilda is a little girl with astonishing wit, intelligence and psychokinetic powers. She's unloved by her cruel parents but impresses her schoolteacher, the loveable Miss Honey. Her school's mean headmistress, Miss Trunchbull, hates children and just loves thinking up new punishments for those who don't abide by her rules. But Matilda has courage and cleverness in equal amounts, and could be the school pupils' saving grace! “Audiences can expect high-energy dance numbers, catchy songs, and a joyous girl-power romp”, said co-director Jan Rominger. “This show features the talents of 30 performers, ages 9 and up.” Added co-director Joe Maniglia, “Children and adults alike will be thrilled and delighted by the story of the special little girl with an extraordinary imagination.” Choreography by Jan Rominger and Will McDonald with musical direction by Kenlynn Winsor. Performances will be held at 7:30 p.m. Thursdays, Fridays and Saturdays and at 2 p.m. Sundays March 27 through April 19, 2020 (no performance on Thursday, April 9). Individual tickets are $21-30 plus applicable fees. The Thursday, April 2 performance is discounted 25%. The Friday, March 27 opening performance includes a post-show reception with the cast. Tickets can be purchased online at Theatrikos.com; by calling (928) 774-1662; or by visiting the theatre’s box office, which is open from noon to 6 p.m. Mondays, Wednesdays, and Fridays and two hours prior to each performance. For nearly 50 years, Theatrikos Theater Company, an award-winning non-profit theatre, has grown into a leading community arts organization. Located in the Doris Harper-White Community Playhouse in historic downtown Flagstaff, the theatre proudly offers nearly 70 performances of classic and new plays, musicals, and youth productions annually.