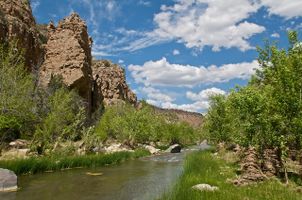 Upper Verde River Threatened by Pumping, Climate, Big Chino Pipeline The upper Verde River faces a triple threat that could disrupt its year-round flow and negatively affect both wildlife and the local economy. Edward W. (Ed) Wolfe, retired U.S. Geological Survey geologist and member of the board of the Citizens Water Advocacy Group (CWAG), will explain how rising temperatures, the demands of new development, and the impact of the proposed Big Chino pipeline endanger Arizona’s longest surviving living river and why it matters in a Zoom meeting on Saturday, Mar. 13, from 10am-noon. The Zoom link and password are posted in the “Next Meeting” section at www.cwagaz.org . Groundwater is the primary water source for existing and new development in the Prescott area (Prescott, Prescott Valley, Chino Valley, and Dewey-Humboldt region). Groundwater, mostly from the adjacent Big Chino basin, also supplies the springs that support year-round flow of the upper Verde River. Wolfe will talk about how the mean annual temperature rise in Yavapai County of 2 degrees Fahrenheit in just the past 25 years, in combination with drought and increasing development, has hastened the rate of groundwater depletion, not only reducing the natural water supply to the upper Verde River, but also threatening the water supply of some of the Prescott-area households relying on wells. Some Prescott-area wells have gone dry, and a deep overdraft, averaging more than 13,000 acre-feet per year has developed over the past 25 years. Prescott, Prescott Valley, and the Salt River Project signed an agreement in 2010 that authorizes the two municipalities to import 8,068 acre-feet per year of groundwater pumped from the Big Chino Valley to support development. The three parties agreed to mitigate any negative impact of their pumping on upper Verde River streamflow, but an iron-clad mitigation plan has not yet been presented. The proposed extraction and importation to Prescott and Prescott Valley of 8,068 acre-feet per year of groundwater from the Big Chino Valley, if not successfully mitigated, threatens eventual loss of year-round Verde River streamflow in the river’s upper 25 miles and reduction of streamflow farther downstream in the Verde Valley. Further, the agreement would provide water for thousands of new houses but offers no reduction of the extraordinary Prescott-area overdraft. Ed Wolfe, Ph.D., is a founding member of CWAG. He is a former chairman of the Verde Watershed Association, former chairman of the Verde River Basin Partnership’s Technical Advisory Group, and former chairman of the Partnership’s Board of Directors. CWAG is a local citizens group advocating for a sustainable water future for Prescott and central Yavapai County and for the protection of the upper Verde River. For more information, visit www.cwagaz.org, www.facebook.com/CitizensWaterAdvocacyGroup or email info@cwagaz.org ###