The earth has always been front and center in the writings of Pulitzer Prize-winning Indigenous author N. Scott Momaday. Over the course of a career spanning more than six decades, Momaday has produced a body of work that reflects his fidelity to the land—and the belief that language can reconnect people to it.

Navarre Scott Momaday was born in 1934 in Lawton, Oklahoma. His father was full-blooded Kiowa and his mother claimed partial Cherokee heritage. Momaday grew up in the Kiowa storytelling tradition, and embraced many other Indigenous cultures when his family moved to Arizona, then to Jemez Pueblo in northern New Mexico after World War II. It was there, at age twelve, that Momaday decided he wanted to be a writer.

His observations of men returning from war would inspire his debut novel, House Made of Dawn. It won the Pulitzer Prize for Fiction in 1969, the first awarded to a Native American author. It broke through many literary barriers, putting Indigenous writing into the mainstream.

Momaday was a long-time fixture in both the writing and Native American studies programs at the University of Arizona, where he taught until his retirement in 2003. He holds a dozen honorary degrees from several other American universities. At age 87, he continues to travel, teach, paint and influence new generations of writers.

Momaday’s latest book, Earth Keeper: Reflections on the American Land, was published in 2020. It is a careful balance of reverence and caution for the earth, and an homage to the preservation of language and culture. Momaday calls the book “a declaration of belonging. . . and an offering to the earth”, as we are all its stewards and storytellers. 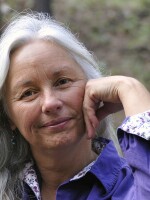 Rose Houk
Rose Houk is a Flagstaff-based writer and editor, specializing in natural history and environmental topics.  Rose was a founding contributor of KNAU's Earth Notes and has written nearly 200 scripts for the series. She is also the author of many publications about national park and monuments, along with audio productions.

See stories by Rose Houk
Lee Born's Weather
Warming continues into the weekend. Breeziness picks up Sunday ahead a storm due to bring a return of cold and unsettled weather early next week, snow and rain amounts appear minimal.
Current Thank You Gifts
View our Current Membership Thank You Gifts
What We Know, And What You Can Do To Help
Learn More