In this week’s segment of KNAU's series PoetrySnaps! we meet Colorado-based poet Crisosto Apache. Their latest book, Ghostword, was released just a few weeks ago. It’s a response to a manuscript written in 1927 by Japanese poet Ryūnosuke Akutagawa. He died by suicide from an overdose of Barbitol, and during the three hours it took him to perish, Akutagawa penned his final work; a 53-paragraph manuscript entitled A Fool’s Life.

Crisosto Apache was fascinated by the notion of writing something complex within a strict timeframe, and they responded by crafting Kugha/Home which they share with us today.

The challenge for me was if I was given three hours to write something, what would I write? I carried a carbon copy of that book for quite a while until I found the actual book because a lot of his work was out of print.

He wrote 53 entries. The entries are like a couple of paragraphs. I'm not sure if he was able to just write 53 entries before he died or if that was the goal. But there are 53 entries.

I sort of mimicked the 53 entries and tried to respond to all 53 within the three hours, but of course I failed. I had to try again, and after I tried a couple of times to do this in the three hours, I finally got a good number of the responses to each. And then that's when the revisions really started.

Some of the titles in this collection mimic the same titles as Akutagawa. Some of them are sort of like slight versions, or ideas. This one is called, Number 3: Kugha/Home:

In the outskirts in a room on the second floor he slept and woke. —Ryūnosuke Akutagawa, tr. by Will Petersen

my boyhood home became periphery because of its location

eight miles away from town, the house I grew up in now empty

burrows inside a thicket of forest left pockmarks on the hillside

inside the thicket remained an empty cask, a remnant of my thick body

—then, no one could hear

the arguments and screams, only the echoes that reverberated through

the tree limbs and leaned against my inner ear becoming part

of the silhouetted tree line

the soldier beetles carelessly roam below the swaying parabola

of slumping sunflowers, where a clump of sod imprints a lasting smudge

still imprinting in my facial skin, transfusing —then I think of the room

now my body, a rooted rotted waste of immersing follicles

against my hairline weaving the forgotten voices and somnolent soil

not forgetting the line which is my forest that forever becomes

—the outskirts of my home

Crisosto Apache is originally from New Mexico and is Mescalero Apache, Chiricahua Apache, and Diné. They hold an MFA from the Institute of American Indian Arts in Santa Fe, and work as an Assistant Associate Professor of English and Associate Poetry Editor for The Offing Magazine. They also do advocacy work for the Native American LGBTQ+ / ‘two spirit’ identity. Crisosto Apache’s latest collection, Ghostword, was released in November by Gnashing Teeth Publishing. 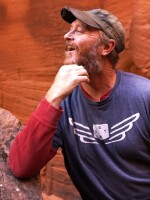 Gillian Ferris
Gillian.Ferris@nau.edu
See stories by Gillian Ferris
Lee Born's Weather
Rain and snow showers are expected to increase in coverage and intensity Monday overnight, coming down heaviest for the Flagstaff area several hours before sunrise Tuesday. The NWS has issued Snow Advisories for elevations above 5000’ on the Coconino and Kaibab Plateaus along with the Mogollon Rim country, where snow forecasts range from 2-5” with some localized amounts up to 8”, (light amounts may be seen as low as 4000’). Shower activity shifts along and south of the Mogollon Rim Tuesday, clearing through the evening.
Current Thank You Gifts
View our Current Membership Thank You Gifts
What We Know, And What You Can Do To Help
Learn More