The Navajo Nation may be moving toward legalizing same-sex marriage for the first time.

The legislation, introduced by delegate Eugene Tso, would repeal the Diné Marriage Act and offer same-sex couples the same rights and protections as heterosexual couples on the Navajo Nation. Currently, only 40 of the more than 500 federally recognized Native American nations recognize same-sex marriage.

Arizona Mirror journalist Shondiin Silversmith has been following this story from the Navajo Nation. She spoke with KNAU’s Bree Burkitt about the cultural nuances surrounding the issues.

KNAU: Is there any penalty under the current law for same-sex marriage or is it just not having that legal recognition?

Shondiin Silversmith, Arizona Mirror: The way that the Diné Marriage Act is outlined is that the marriage between persons of the same sex is void and prohibited. So, they do not have any protections under law on the Navajo Nation and their marriage isn’t recognized by the Navajo Nation at all. In terms of spousal rights, that would come with, like, visiting your spouse in the hospital or making sure that they have proper health cover under the employment claims and stuff like that.

KNAU: Does there appear to be public support for the bill at this point?

Silversmith: There was a lot of support of favor of it in terms of equality for the Navajo people and for families. And then you also had a very religious side to it because Christianity is a dominant religion on the Navajo Nation, so you had a mixture of that, as well.

And during the committee hearing there were two people who came forward to testify. One was Dr. Jennifer Denetdale, she’s a professor at the University of New Mexico, and then the second person was a Navajo woman named Josie Raphaelito who was originally from Raymond, New Mexico, but she currently lives in Buffalo, New York with her wife. When she thinks about coming home to the Navajo Nation, she wants to be able to feel safe with her wife — to know that their marriage is recognized the same way other marriages are recognized on the Navajo Nation. So, she talked a lot of how this bill is really about equality and family because it will bring people back together. She said it will give the opportunity for couples like herself — where she lives off the Navajo Nation — a chance to come home.

That one of the oppositions that came… it was from Navajo Nation delegate Paul Begay Jr. and he talked about how he does haver family members who are part of the LGBTQ and two-spirit community and he doesn’t see them any differently, but he couldn’t vote in favor of the bill because he proposed that it goes against the values bestowed by the holy people, which includes that men and women should coexist together. But as part of the Navajo way of life, it’s believed that the holy people taught the Diné people how to live and conduct their everyday life and as part of his argument is that this bill goes against the laws of the holy people and he can’t vote in favor of it.

So I think that’s something that a lot of people have to remember when thinking about this bill. It’s really different when it comes to an Indigenous community because indigenous communities have different cultures, traditions and ways of life.

That was Shondiin Silversmith, a journalist with the Arizona Mirror. The Navajo Nation Council is expected to hear the Diné Marriage Act later this year. 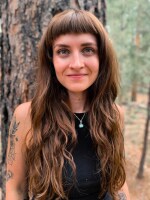 Bree Burkitt
Bree Burkitt is the host of Morning Edition and a reporter for KNAU. Previously, she worked as a reporter and editor for The Arizona Republic, covering public safety, law enforcement and crime. She is a graduate of Northern Arizona University and has additionally worked at The Spectrum & Daily News in Southern Utah and the Arizona Daily Sun. When not working, Bree can usually be found reading or out in the woods with her two dogs, Jill and Sonora.
See stories by Bree Burkitt
Lee Born's Weather
A low-grade monsoon pattern will be in place through the week. Widely scattered showers and thunderstorms can be expected each afternoon.
Current Thank You Gifts
View our Current Membership Thank You Gifts
What We Know, And What You Can Do To Help
Learn More