KNAU's Southwest Book reviewer, Mary Sojourner, has lived in the desert for decades. She thought she knew all about it. She thought she'd memorized its sunsets, people and nuances. But then she read Cowboys and East Indians, by Nina McConigley. That's when Sojourner realized she'd been looking at the desert southwest through a very narrow lens, as she reveals in this month's book review.

I read, write and review books from the perspective of a 76-year old white woman raised in a small farming town in upper New York state. I emigrated to the Southwest in 1985 as a 45-year old white woman who, as a little girl, had wanted nothing more than to be a cowboy - a cowboy who was a sidekick to a real Indian. In short, I read, write and review books with cultural myopia.

After I read Nina McConigley's detailed and humor-rich short story collection, Cowboys and East Indians, I understood that for 31-years I have experienced a fraction of the West. I've treasured and written about the mountains, rivers and deserts. I've listened to and written stories about Native Americans, Mexican-Americans and Anglos. All the while, I've barely seen or listened to dozens of other cultures that make-up the Western and Southwestern landscapes.

Nina McConigley was born in Singapore and raised in Wyoming. Her real life alchemizes into stories of a little girl who drank Tang and ate samosas for her afternoon snack; a group of young bridesmaids in saris, making S'mores and drinking beer around a chuck wagon campfire; and the newly arrived woman, Chitra, who sees her first oil pumping jack and says, "And that fellow looks like he is bowing to Allah!"

McConigley writes about the rich and maddening world of being a girl, teenager and woman neither fully Indian, nor fully Anglo, but thoroughly American. In the short story White Wedding, Lucky's mother is dying from cancer. "Lucky," she says, "I have to ask you something. I want you to promise something. Lucky, I can't be buried in Western clothes. I had a dream last night that I was in my coffin, and you were burying me in a frilly pink nightgown. Promise me I won't be in Western clothes." Lucky promises. Then her mother teaches her how to put on a sari.

McConigley's language is consistently - not just poignant - but elegant. "As the speeches began, I went out the back door. The house was hot and smelled like curry. Outside the wind bellowed. I stood on the lawn and listened to the air move through the cottonwoods. I picked up a cottonwood branch and broke it at a joint. Inside was a perfect star. Few people knew this."

Cowboys and East Indians taught me more than how to see the cottonwood star. It taught me how to see and hear far beyond the perspective with which I had unknowingly lived. In that, Nina McConigley has given me the real West. 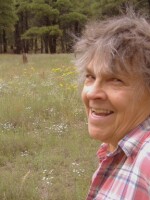 Mary Sojourner
Mary Sojourner is the author of three novels: Sisters of the Dream Northland Publishers, 1989; Going Through Ghosts, University of Nevada Press, 2010 and 29, Torrey House Press, 2014; the short story collection, Delicate, Nevermore Press, 2001 and Scribner, 2004; essay collection, Bonelight: ruin and grace in the New Southwest University of Nevada Press, 2002 and 2004; memoir, Solace: rituals of loss and desire, Scribner, 2004; and memoir/self-help guide, She Bets Her Life, Seal Press, 2010. She has been a ten-year NPR commentator and now reviews books for KNAU’s Southwest Book Reviews. She’s the author of op eds and columns for High Country News, Yoga Journal, Writers on the Range, Matador Network and dozens of other publications. She was chosen as a Distinguished Writer in Residence in 2007 by the Virginia C. Piper Center for Creative Writing, ASU.
See stories by Mary Sojourner
Lee Born's Weather
Gradually less windy through a partly cloudy and seasonable Friday.Over the weekend we are looking at mostly cloudy skies that may deliver some light rain showers Saturday night and Sunday to the Mogollon Rim Country, White Mountains and far eastern AZ, (snow will only fall over highest mountain peaks). Temperatures remain seasonably mild.
Current Thank You Gifts
View our Current Membership Thank You Gifts
What We Know, And What You Can Do To Help
Learn More
Related Content