The oldest organism in the world is 600,000-year-old Siberian bacteria, and the oldest plant is a 200,000-year-old sea grass meadow near Spain. But the Southwest has the distinction of being home to the largest concentration of old plant species.

Many of these are “clonal,” meaning they can reproduce through root shoots that are genetically identical to the parent plant.

The oldest known clonal species in the Southwest is a Quaking Aspen stand found on the edge of the Colorado Plateau in Utah. Named Pando, the stand contains about nearly fifty thousand trees and is estimated to be 14,000 years old.

Mojave yucca is the second oldest clonal stand, estimated at 12,000 years. An individual plant reaches maturity after a century and it can reproduce sexually by pollination and seed germination. But yucca also produce side shoots that are clones of the parent and become the next generation. Those side shoots mature producing their own side shoots, on and on through the ages. Eventually the original shoot dies leaving a ring of stems. Genetically it’s all the same plant, unless the subterranean roots are severed.

The third oldest clonal species in the desert Southwest is creosote, with the King Clone stand recorded near Landers, California estimated at just under 12,000 years.

And there are plenty of species that reach ancient ages without the benefit of cloning. Three different species of Bristle Cone pines found within the Great Basin and Mojave Deserts live as long as five millennia….which means they sprouted hundreds of years before the pyramids of Egypt were built. 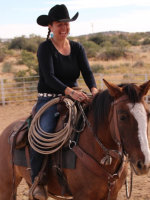 Carrie Cannon
Carrie Calisay Cannon is a member of the Kiowa Tribe of Oklahoma, and also of Oglala Lakota and German ancestry. She has a B.S. in Wildlife Biology and an M.S. in Resource Management. If you wish to connect with Carrie you will need a fast horse; by weekday she fills her days as a full-time Ethnobotanist with the Hualapai Indian Tribe of the Grand Canyon of Arizona, by weekend she is a lapidary and silversmith artist who enjoys chasing the beautiful as she creates Native southwestern turquoise jewelry.
See stories by Carrie Cannon
Lee Born's Weather
Warming continues into the weekend. Breeziness picks up Sunday ahead a storm due to bring a return of cold and unsettled weather early next week, snow and rain amounts appear minimal.
Current Thank You Gifts
View our Current Membership Thank You Gifts
What We Know, And What You Can Do To Help
Learn More
Related Content